Learn from a billionaire how to handle this economy and life. 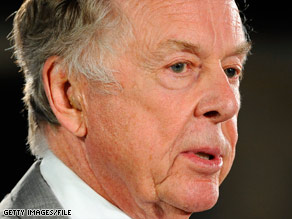 You can learn a lot about resiliency and success from a billionaire! Thursday, September 25th marked the largest bank failure in US history. The same day, CNN interviewed T. Boone Pickens, the now famous oil man and fund manager.

His fund had lost about $1 billion and he personally lost about $300 million, 10% of his assets. Now before your conditioned ego mind says, “yeah, he can take it, he’s rich”, realize that no one feels good losing 10% of their money, or anything for that matter. What’s different about us is HOW we handle loss.

Here’s what Pickens said: “I turned the wrong direction, is what it was. You know, you win some and lose some. Some are rained out, you know. You wish this one had been rained out, but it wasn’t.”

That’s a secret to the game: you win some, you lose some! That’s how champions play a game. They embrace uncertainty. They realize with great rewards come risk. They focus on the long game. The losses mean nothing.

So practice this mantra all month: You win some, you lose some! Say it throughout the day. Consider previous losses and say this mantra. Realize that loss is a part of going for big wins. You can learn a lot from a billionaire!