Learning from the world’s youngest billionaire

Did you know there are now 1,011 billionaires in the world? Who’s the youngest? The founder of Facebook, Mark Zukerberg, 26 years old. 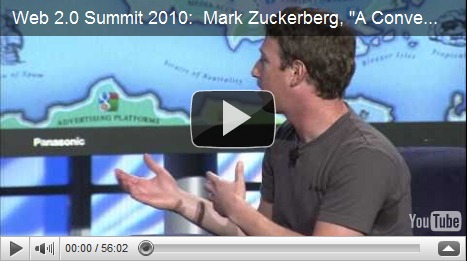 At 35 minutes in, Mark is asked “How much do you think about maintaining the culture of Facebook?” Mark’s reply, “Every day!” Mark clarifies by saying a bit about what culture means to him. Facebook has five written values all the employees know. Two of them are 1) move fast & 2) be bold. Later, Mark also talks about 3) take risks.

If you read my recent article about Richard Branson, he also revealed his values. Values are our guidance system. They are the most powerful thing guiding us, yet most people don’t know what theirs are and don’t have them written down. If you’re not happy, your values are off. Period.

Mark also shares a core belief: “If you make something people like you can make mistakes.” This belief supports his third value of taking risks and drives Facebook to massive success. You’ll see this belief in the companies dominating the markets today, like Apple. They make plenty of mistakes, but that doesn’t matter because they focus on making products people actually like and use.

Values and beliefs are crucial for the success of any company and for individuals. What are your values? What are your beliefs? That’s the only reality that exists for you. Think about it.

2 responses to “Learning from the world’s youngest billionaire”